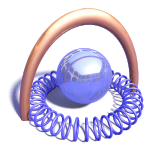 negative index of refraction are an area of intensive research although most practical experiments in this field are made in the longer wavelength range than visible light. Using the raytracing technique we can simulate how such materials would interact with light in the visible range even if such materials do not exist yet in reality. Several interesting effects can be observed when doing ray optics with such materials.

Snell's law the light leaves the surface on the same side of the surface normal as it enters. This is quite counter-intuitive so objects of such a material appear quite unusual in raytracing simulations.

POV-Ray's way of handling refraction (using Heckbert's method) correctly deals with negative values for the refractive index so simulating metamaterials is as simple as changing the sign of the ior value. The consideration of the index of refraction when calculating variable reflection is compatible to negative values as well. Both refraction and reflection handling work equally for normal backwards raytracing and photon mapping so all ray-optical effects that can be simulated for normal materials using POV-Ray can be studied for metamaterials as well.

One interesting effect of a negative index of refraction is that refractions tend to move in the opposite direction of what you expect when moving or rotating the refracting object as can be seen here:

Below you can adjust the index of refraction of the transparent cube by moving the mouse along the bar in the middle.

One possible application of optical metamaterials could be the creation of lenses. For normal glass lenses convex forms tend to have a light focussing effect while concave lenses defocus light. Lenses made of negative ior material would have the opposite effect: