The main news is: The generalized coastlines are now – at least for the moment – no more based directly on the OpenStreetMap coastline. The reason is the increasing trend to exclude coastal water areas from the coastline and map them separately as water polygons. Here an example from the West African coast: 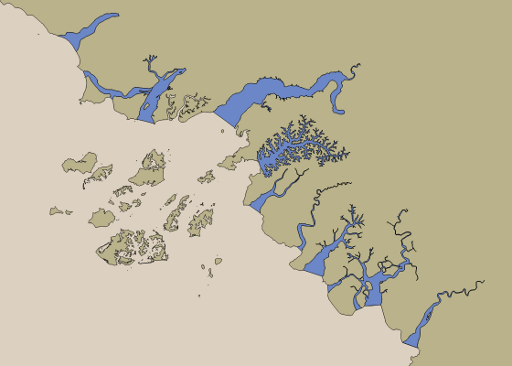 I explained this in more detail in the coastline quality report. While previously the only processing i did on the coastline data as generated by OSMCoastline was removing the large lakes still tagged natural=coastline i now also add a number of water polygons that have been removed from the coastline although they – at least to a large part – belong to the maritime domain, i.e. are dominated by ocean currents and form maritime ecosystems. For the moment this is just a collection of OSM IDs – in case you are interested here it is:

I have the hope this trend will reverse again over time and this list can shrink again – if not i will probably add some tag to those features (maritime=yes comes to mind) to manage them. I suppose mappers who tagged these features at least sometimes have good reason to do so. In most cases i would assume simply having both the water polygon and the coastline like it is done for the Elbe river for example could make everyone happy.