Map design and Geo-Visualization is to a huge part about abstraction. To illustrate this here is an example from my standard demo map from the Western Alps and a 3D perspective view of the same area. 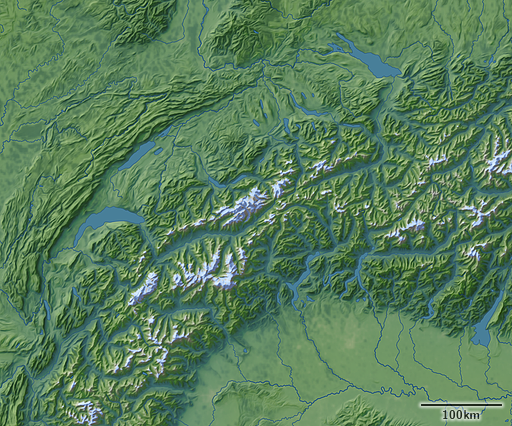 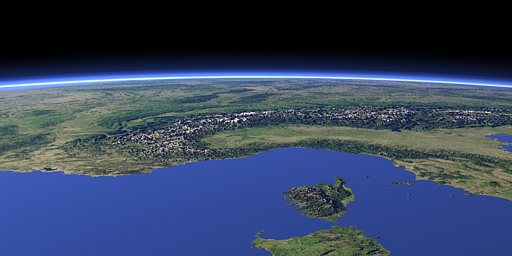 These two illustrations make very different use of abstraction, meaning that they deliberately depart from trying to show the most realistic impression possible in different ways, for example:

These are just the most important differences, overall it seems in most aspects the map uses stronger abstraction and the 3D view is more realistic but the 3D view is of course far from being truly realistic as well – through obvious things like the lack of clouds of course but also by ultimately being a 2D depiction of a 3D object just like the map.

Now i can try to recombine these abstraction techniques in different ways to create different kinds of illustrations. Some of these combinations work quite well, others not so much and even others are technically tricky or even borderline impossible. Lets have a look.

First starting from the map we can depart from the straight down view and choose an inclined view direction. This can be seen below.

This is still an orthographic perspective (meaning as seen from infinitely far away) and it still uses all the other abstraction techniques from the map. This gives a somewhat different impression of the relief but overall it does not really work better than the classical map view. This is not so astonishing given that the style of shading and everything else is originally designed for the normal map view.

I can now add a more physically based lighting and shadows which changes the overall appearance quite drastically.

The 3D impression you get from this image is different because the hints our brain gets from the two-dimensional image concerning the three-dimensional geometry are very different now. Of course adding shadows to the map view is possible as well but it is difficult to make it work well there without being more irritating than helpful, especially in coarse map scales like this and is not usually used in relief rendering for maps for good reasons.

If we now replace the land cover surface coloring with a realistic surface color we are already quite close in appearance to the initial 3D view. The lighting direction is somewhat different, no atmosphere effects, planar geometry base and orthographic perspective are the main differences remaining.

Common to all three examples is the perspective used. Compared to the 2D map view this compresses the view area vertically resulting in a smaller height of the image and the surface is displaced by the relief so there is no more a precise relationship between image coordinates and the geographic coordinates but roughly this still works. Most importantly the scale of the image does not vary like it does in a normal perspective view between foreground and background. You can vary the perspective by rotating the view from straight down like in the normal map to grazing angles. The flatter the view the better visible the relief is and the more mountains will occlude the terrain behind them while the map area is increasingly compressed vertically. The examples above use a viewing angle of 60 degrees from the vertical which compresses the image to half the size vertically.

Applied to the sample map here it looks as follows – with the illumination direction changed to southwest as it is more common than northwest direction in plan oblique views. 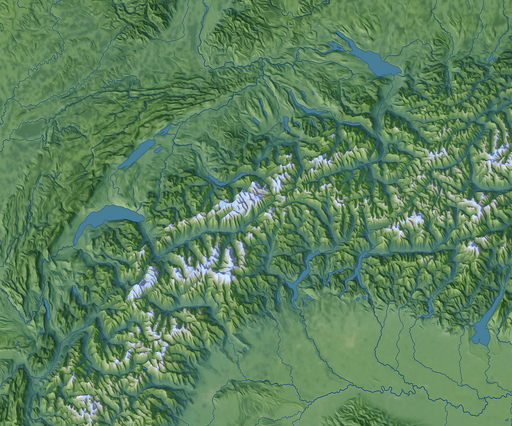 In the plan oblique view the base coordinates on flat sea level terrain are identical to the normal map. As long as two points are approximately the same elevation you can measure distances like in a normal map. But this is of course not a realistic perspective, not even approximately like an orthographic view.

One of the most appealing things of the plan oblique perspective to the map designer is that it can be used to circumvent the first commandment of relief rendering (that is not to use vertical exaggeration). The above example uses a compression ratio of 1:3 meaning it is based on an orthographic perspective of one third the height of this image (that is approximately 71 degrees inclination angle). The more inclined the viewing direction is the stronger the relief is emphasized without actually creating an incorrect geometry as you would with real vertical exaggeration. Still a ratio of more than about 1:4 is rarely useful since a more inclined view also leads to more occlusion of the terrain and extreme stretching on the mountain faces in direction towards the viewer. The following two images show ratios of 1:2 and 1:4: 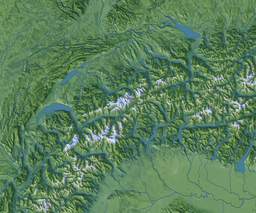 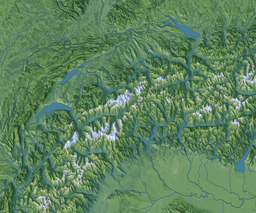 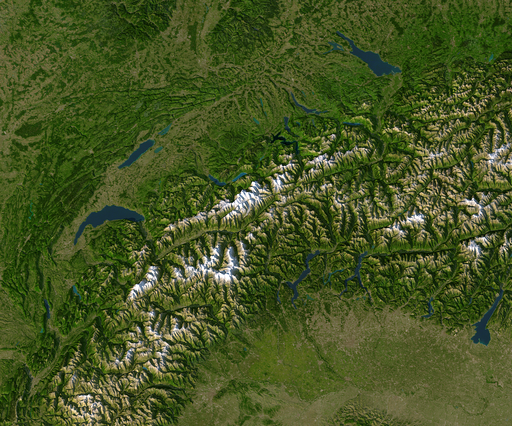 None of the images i showed except the reference 3D view use a normal central perspective. The reason is that using the various techniques of abstraction common in maps is difficult with a strongly varying scale of the image as it is inherent to a central perspective view. Getting the abstraction of common map design techniques into a varying scale perspective view and maintaining a convincing 3D impression at the same time is a real challenge. I mentioned some aspects of this problem shortly and showed some first attempts in that direction with the Severnaya Zemlya views.