With the March equinox past a few weeks we are now approaching the northern hemisphere satellite image season while the Antarctic is settling down for the polar night. Here two images from both sides of the world from the end of March illustrating this.

The first shows the Ryder Glacier in northern Greenland, one of the northmost outlet glaciers of the Greenland ice sheet at about 81.5 degrees latitude. You can see the same area in summer on the Landsat Mosaic of Greenland. 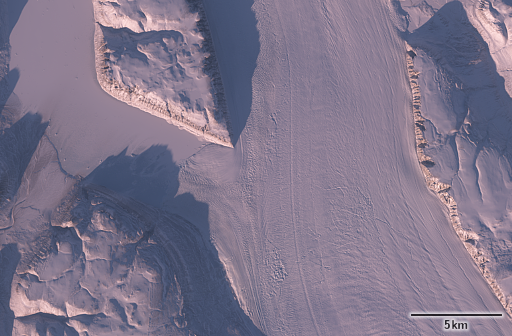 The second image shows the Reeves Glacier in Victoria Land near the Antarctic coast forming beautiful patterns of crevasses as it flows into the Nansen Ice Shelf. 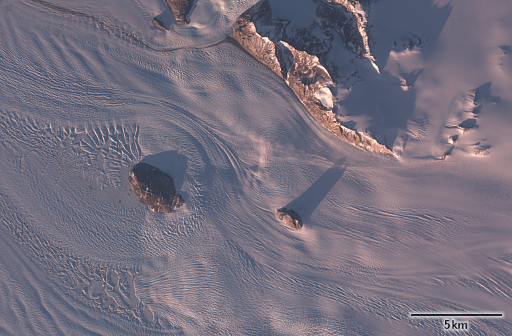 Note the second image is in polar stereographic projection with south up. I did this to have both images with a similar light direction from the lower left – with north orientation the light would come from the opposite side and seeing both these images together would be rather confusing.

The climate in both areas shown is not so different – both are very cold and dry overall. The most significant difference is that summer temperatures are significantly higher in northern Greenland leading to extensive surface melting of the glacier – the meltwater channels created by this are still visible in the late winter image although at the time the images are taken it is of course significantlay colder in northern Greenland than at the Antarctic coast. On the Reeves Glacier melting only plays a minor role and only in the lowest parts.

Both images are based on Copernicus Sentinel-2 data.