The large iceberg that has broken off the Antarctic peninsula in 2017 and that has slowly drifted across the Drake Passage during the past year – i showed some pictures from the beginning of that journey already – has now reached the island of South Georgia which results in impressive pictures demonstrating the enormous size of the iceberg. Like this view from Sentinel-3B from December 14: 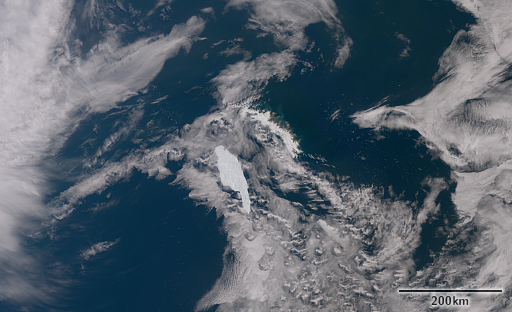 The Iceberg might become grounded in shallow water near the island and could this way significantly affect the ecosystem in the area. Note however that while an iceberg of this size is fairly rare, smaller yet large icebergs are very common around South Georgia because currents and winds in the area lead to a large number of icebergs from the Weddell sea area to drift north along a similar route as A-68. So with a long term historical view such a visit of a very large iceberg of more than a hundred kilometers in size near South Georgia is most certainly not unprecedented, even though previous similar events were not recorded in as much detail by earth observation satellites of course.