Two and half a year ago i showed pictures on a large iceberg calving in the Antarctic producing a more than hundred kilometer long iceberg east of the Antarctic peninsula. The iceberg has since then slowly moved away from its original location northward with the general direction of the Weddell sea ice drift and is now about to leave the area of more or less permanent drift ice and enters the open ocean. A few days ago during clear weather the following views were recorded by satellites showing this rather impressive situation.

First the larger area view based on data from Sentinel-3A shows the massive size of the iceberg dwarfing the smaller islands around the Antarctic peninsula. 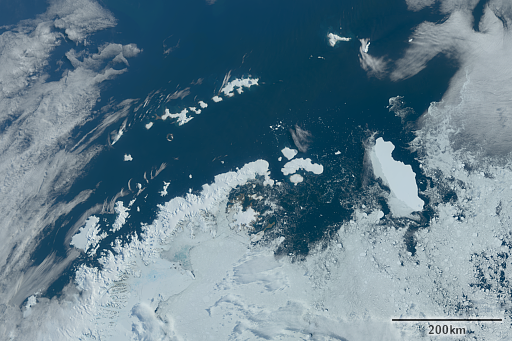 The second image image is a more detailed one recorded by Sentinel-2B providing a good look at the details of the iceberg itself. 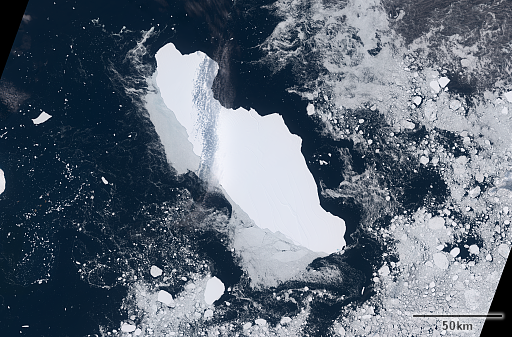 Although it is not visible on the bulk of the iceberg surface – which is covered by a thick layer of snow – as it drifts further north the iceberg is now during summer massively melting both from the bottom and the top. You can see this on a smaller sea ice area attached to the iceberg at the southeastern end shown in the following crop. 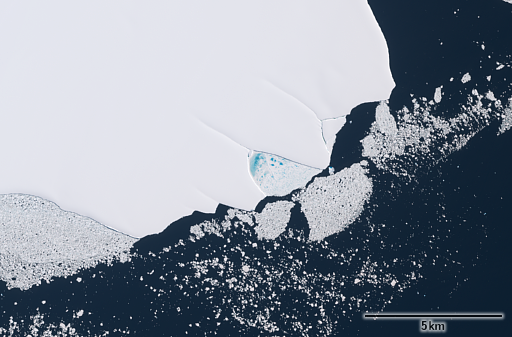 Despite this rapid melting that will increase as the iceberg floats further to the north it can take many years until the iceberg is fully dissolved. As the ice thins it will probably at some point break up into smaller pieces which can drift pretty far north – i have shown a pretty large iceberg piece north of South Georgia in 2017 at a latitude of 54 degrees south. The iceberg featured here will likely head in a similar direction.