One of the major things i noticed when i started working on the coastline generalization techniques was the very mediocre quality of the coastline data for Antarctica in Openstreetmap.  This is particularly interesting since Antarctica is in fact exceptionally well covered by free geodata.  Since there is only very limited short term commercial interest in such data there is is only little financial incentive to restrict access to and use of data for this region and therefore the vast majority of data that exists for this continent is actually free.  Due to the remote and inaccessible location of the region the available data is of course often less detailed and precise than elsewhere.

Jochen Topf has now started an initiative to improve the situation in Openstreetmap.  There are several issues that arise in that matter, some specific to Antarctica, some more general related to mapping polar regions.

Jochen has already pointed out the more practical problems.  Although the database of Openstreetmap is generic and has no issues with polar locations the editors and rendered maps broadly use the common web Mercator projection which only extents to 85 degree latitude in both north and south.  This hard limit is not that much of an issue though since the more interesting parts of Antarctica are mostly further north.  A more serious problem is map distortion.  All map projections are a compromise since mapping the surface of the earth to a plane inevitably results in distortions.  Both the web Mercator and the plate carrée projection (EPSG:4326) are free of distortion only at the equator.  Towards the poles distortion increases.  The web Mercator projection could be described as compensating for this distortion by changing the scale towards the poles.  This leads to the well known effect that Greenland appears larger than Australia on such maps. 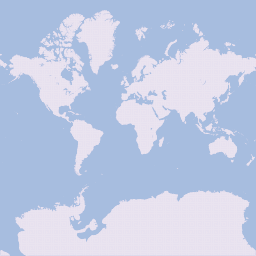 But this is only part of the whole story since the meridians are still parallel in the map although they are not in reality when you get close to the poles.  This means while smaller structures are fine larger structures get distorted.  To give an example: take a soccer field in northern Norway (like this one) – when this is drawn as a perfect rectangle in Openstreetmap it is actually a few centimeters wider at the southern end.  This is not much but northern Norway is not particularly far north and a football field is not very large either.

Long story short – to accurately map polar regions you would need to use a different map projection – both for displaying the map and for editing it.  For polar regions Polar Stereographic projections are the most common – they have no distortion at the pole and it slowly increases for all longitudes as you get to lower latitudes.  This would be a big step for Openstreetmap though since so far everything is handled with either web Mercator or plate carrée there (which are fairly similar) and not much is mapped near the poles.  So far all larger structures in the Openstreetmap data, in particular the multipolygons, are defined in plate carrée (i.e. normal geographic coordinates, longitude and latitude) and a multipolygon that is valid in plate carrée is not necessarily valid in polar stereographic.  This is not only a problem for structures crossing the edge of the projection (i.e. the 180 degree line or the poles)  but is simply a result of the fact that the shortest line between two points on the earth surface (like two nodes of a way) is not a straight line but an arc.

Other issues arise when dealing with the special geography of polar regions.  As Jochen has also mentioned there are large, permanently ice covered areas of Ocean around Antarctica called ice shelves.  Those are not to be confused with sea ice which is permanently moving and no more than a few meters thick.  Ice shelves have a thickness of 100m or more and usually consist mostly of ice from the glaciers feeding them.  Currently Openstreetmap classifies these as ocean meaning the coastline is drawn at the grounding line (the line where the ice gets in contact with the bedrock).  Moving the coastline to the shelf ice edge would have several advantages:

In any case the ice shelves would need to be separately mapped – the Arctic ice shelves at Ellesmere Island are currently tagged as glaciers.  Jochen suggested a new separate tag (natural=ice_shelf) and there is a currently discussed proposal that would allow to tag them as a glacier type (glacier:type=shelf).

Another thing that needs to be considered that is specific to polar region geography is the inland ice.  Nearly all of Antarctica is covered by ice but at the coast and on mountain ridges there are many thousand, probably millions of small, ice free areas.  Mapping those with the current means of Openstreetmap would require a very large multipolygon with a huge number of inner rings.  Developing a new area data structure that could deal with such large multipolygons is currently in discussion.  It could also be considered to split the ice sheet along logical boundaries – like the drainage basins.  Interestingly glaciers are one of the few larger polygon structures that are rendered with an outline in the default rendering style on osm.org which kind of discourages such splitting since you would not normally want those divisions to show up in a rendered map.

As already said in the introduction much of the geographic data that exists on Antarctica is free.  But since there are only very few people living and working there assessing the quality of the data is somewhat difficult.  For the coastline, which is the most important thing to improve in OSM, there is a widely used data set supplied by the NSIDC which is produced from the MODIS Mosaic of Antarctica (MOA).  This data set has two problems though.  First it is – although distributed as a vector file – in fact a raster data set that needs to be properly vectorized before it can be used in Openstreetmap – i did this and you can download the result.  But more importantly it contains quite serious errors.  The land/water mask seems to be based on automatic classification and this seems to wrongly interpret many coastal ice free areas as well as mountain shadows incorrectly as water.  Below you can see an example with the MOA coastline in orange and the LIMA mosaic and a map based coastline from the LIMA WMS server in the background

So while the resolution of the MOA coastline is – corresponding to the MODIS sensor data used – not so bad (nominally 125m) there are inaccuracies in the resulting coastline position of sometimes several kilometers.

A few more general words on the data situation: Nearly all data for Antarctica is remotely sensed and most of it based on satellites.  So in what ways do satellite images of polar regions differ from those of other regions?  Most earth observation satellites cover the polar regions just like other parts of the earth.  Most high resolution sensors have a gap at the poles though which is not covered.  Since those satellites are in near polar orbits they produce better (i.e. more frequent) coverage of those areas.  On the other hand everything beyond the polar circles is dark for at least part of the winter and in summer the sun is lower leading to longer shadows and worse visibility of things on satellite images.  Seasonal variation of the appearance is mostly an issue in the Arctic and much less in the Antarctic.

Openstreetmap is foremost a community project so another question is how does mapping of a region hardly any Openstreetmap contributor will ever set foot on fit in there.  I explained elsewhere that i think a minimum of uniformity in the quality of mapping, even on a global scale, is important for the usefulness of a map.  So the reasons why there should be a good quality representation of Antarctica seems quite clear.  The real question is how this can be accomplished as a community project.  Mapping based on aerial and satellite images has generally risen in importance in Openstreetmap and is sometimes also diminishingly called armchair mapping.  But while in other regions there is generally a verifiable ground truth this is not usually available in Antarctica.  The mentioned LIMA mosaic would be well suited as a starting point for community mapping since it is detailed enough to actually identify many mappable features.  This would really call for the use of a different map projection though.  And since nothing can be verified on the ground the skills and scrutiny of the mapper to interpret the data and compare it with other sources for verification are much more important than elsewhere.  To me it seems practical mapping of Antarctica could be at least as much a data aggregation, unification and verification task as it is original data acquisition – if this is a suitable goal for a community project could be subject to discussion I suppose.