Recently i made some effort updating the Antarctic coastline in OpenStreetMap regarding the most significant changes due to the movement of the ice. This essentially means bringing the position of the outer edges of the three largest ice shelf plates to the current state. These ice edges move by about 1-2 km per year, i had last updated them about two years ago and in between no one else has significantly modified the data. There is not that much additional value in mapping these in fine detail even if suitable images are available so i used fairly low resolution images as basis. Other parts of the Antarctic coastline have not been updated in recent years so are fairly outdated but probably more than 80 percent of the area change happens in these sections. 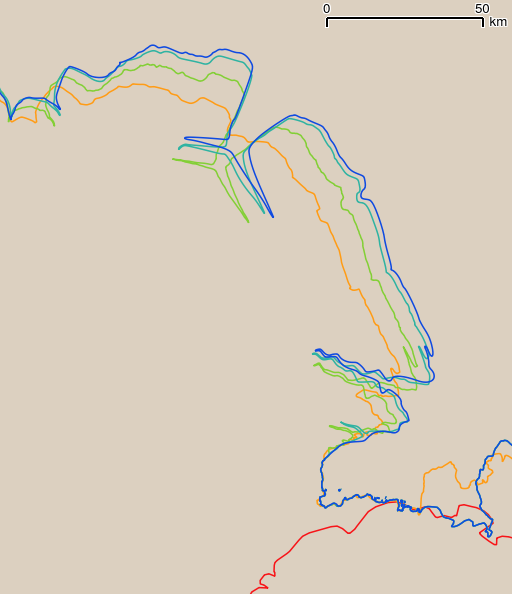 For illustration above the history of the coastline at the Amery Ice Shelf edge in OpenStreetMap. This kind of regular change with updates from time to time in the database makes these areas a great test case of evaluating the update cycle of maps. The shown changes happened early 2013, mid 2013, early 2015 and the last one about two weeks ago. Most OSM based maps show changes in the base data pretty fast, sometimes after minutes. But this only applies to normal small geometries and only to the higher zoom levels. Low zoom updates tend to be less frequent and coastline updates likewise. The map on osm.org usually updates the coastline data on a daily basis but the low zoom levels up to z12 are only rendered once per month. Many other map services are even slower. Here a Map Compare view of various maps of the area discussed. 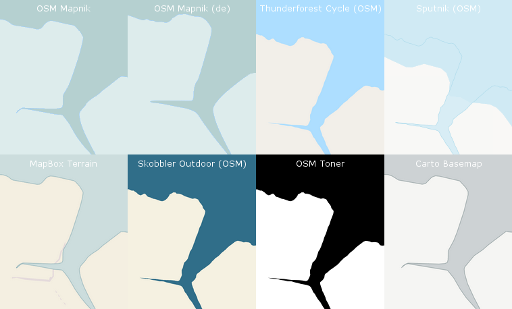 Right now the German OSM style on openstreetmap.de seems to be the only widely used one that is up-to-date with the coastline at the low zoom levels two weeks after the edits have been made. The map on openstreetmap.org is currently behind in updates due to hardware problems but would normally also show the current data at least on the higher zoom levels. As you can see many of the other map styles do not even show the 2015 update although on the positive side it should be noted that no map style i checked with some importance is using a pre-ADD (before mid-2013) data basis. In the coming weeks and months you will be able to observe if and when the various map providers update their coastline data basis.

If you render maps based on OpenStreetMap data you can find recent coastline data on openstreetmapdata.com.