As many of you have probably already read elsewhere there has been a large iceberg calving event in the Antarctic recently at the Larsen C ice shelf at the east side of the Antarctic peninsula. The interesting thing about this is much less the event itself (yes, it is a large iceberg and yes, it probably is part of a general decline of ice shelves at the Antarctic Peninsula over the last century or so but no, this is not in any way record breaking or particularly alarming if you look at things with a time horizon of more than a decade). The interesting thing is more the style of communication about it. Icebergs of this size and larger occur in the Antarctic in intervals of several years to a few decades. It is known that many of the large ice shelf plates show a cyclic growth pattern interrupted by the calving of large icebergs like this one, sometimes on a time scale of more than fifty years. This is the first such event that was closely tracked remotely. In the past people usually noticed such events a few days or weeks after they happened while in this case there was a lot of anticipation with the development of cracks in the ice and for months we kind of had frequent predictions of the calving being expected any day now – or in other words: A lot of people apparently were quite wrong in their assumptions on how exactly such a calving would progress.

I am not really that familiar with the dynamics of ice myself so i won’t analyze this in detail. The important thing to keep in mind is that ice at the scale of tens to hundreds of kilometers and under the pressures involved here behaves very differently from how you would expect it to behave in analogy to ice on a lake or a river you might observe up close.

The other interesting thing about this iceberg calving is that it happened in the middle of the polar night. Since the Larsen C ice shelf is located south of the Antarctic Circle this means permanent darkness during this time. So how do you observe an event in the dark via open data satellite images?

One of the most interesting possibilities for nighttime observation is the Day/Night Band of the VIIRS instrument. This is a visual/NIR range sensor capable of recording very low light levels. This is best known from the nighttime city lights visualizations you can find – which feature artificial colors.

This sensor is capable of recording images illuminated by moonlight or other light sources like the aurora. So we got some of the earliest images of the free floating iceberg from VIIRS. 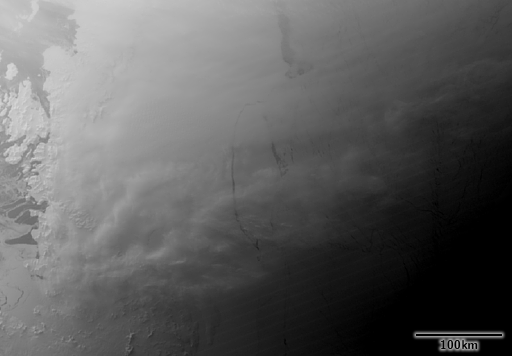 This image uses a logarithmic scale, actual radiance varies across the shown area by about three orders of magnitude.

Another much older and better established way for nighttime observation is in the thermal infrared. In the long wavelength infrared the earth surface is emitting light based on its temperature and this emission is nearly the same during the day and night. Clouds emit in the long wavelength infrared as well which makes thermal infrared imaging an attractive and widely used option for 24h weather observations by weather satellites.

Thermal infrared data is available from the previously mentioned VIIRS instrument but also from MODIS and Sentinel-3 SLSTR. Here an example from the area from SLSTR. 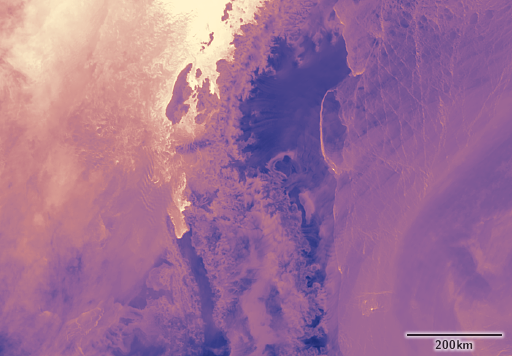 During the polar night the highest temperature occurs at open water surfaces like on the west side of the Antarctic peninsula on the upper left and the lowest temperatures in this area occur on the ice shelf surfaces and the low elevation parts of the glaciers on the east side of the Antarctic peninsula. The outline of the new iceberg is well visible because of the relatively warm open water and thin ice in the gap between the iceberg and the ice shelf.

Thermal infrared images are also available in significantly higher resolution from Landsat and ASTER images. Landsat is not regularly recording nighttime images in the Antarctic but there have been images recorded recently in the area because of the special interest in the event. Here an assembly of images from July 12 and July 14. 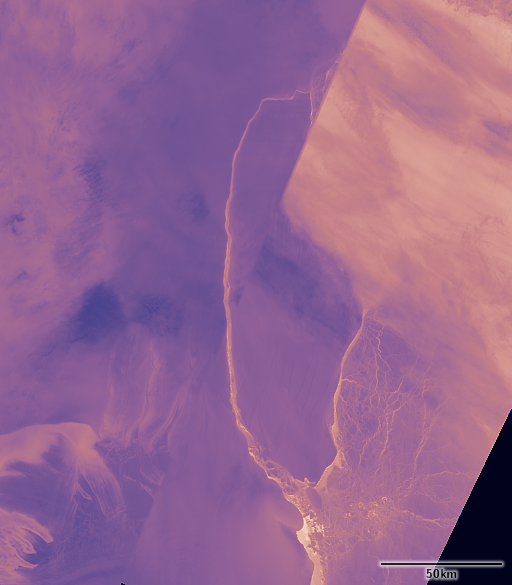 You can see there is a significant amount of clouds, especially in the scenes on the right side obscuring the ice features under it. Here a magnified crop showing the level of detail available. 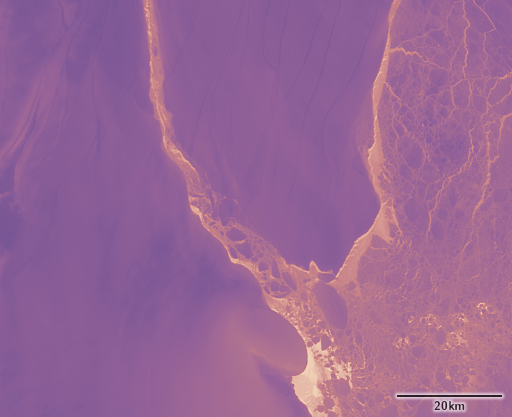 ASTER so far does not offer any recent images of the area. In principle ASTER currently provides the highest resolution thermal imaging capability – both in the open data domain and in the world of publicly available systems in general – though there are probably classified higher resolution thermal infrared sensors in operation.

So far everything shown has been from passive sensors recording natural reflections and emissions. The other possibility for nighttime observations is through active sensors, in particular radar. This has the added advantage that it is independent of clouds (which are essentially transparent at the wavelengths used).

Radar however is not initially an image recording system. Take the classical scope of a navigational radar system for example – the two-dimensional image is built by plotting the signal runtime of the reflected signal received from the different directions. Essentially the same applies to radar data from satellites.

Satellite based radar systems that produce open data products currently exist on the Sentinel-3 and Sentinel-1 satellites. Sentinel-3 features a Radar altimeter capable of measuring the surface elevation in a small strip directly below the satellite. This is not really of interest for the purpose of observing an iceberg calving.

Sentinel-1 on the other hand features a classical imaging radar system. The most widely used data product from Sentinel-1 is the Ground Range Detected data which is commonly visualized either in form of a grayscale image or a false color image in case several polarizations are combined. Here is an example of the area under discussion. 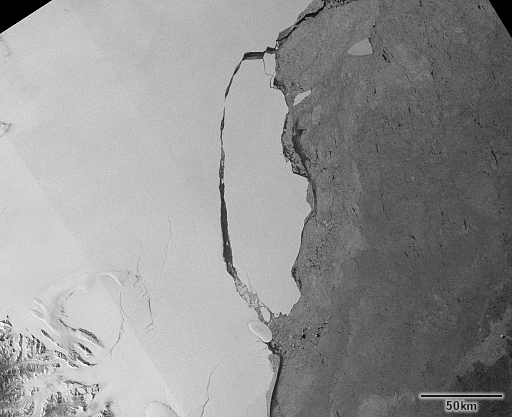 Note while this looks like an image viewed from above it is not. The two-dimensional image is created by interpreting run time as distance (which is a quite accurate assumption) and then mapping the distance to a point on an ellipsoid model of earth (which is an extreme simplification). In other words: the image shows the radar reflection strength at the position where it would have come from if the earth surface was a perfect ellipsoid. For the ice shelf this is not such a big deal since it raises no more than maybe a hundred meters above the water level which is very close to the ellipsoid but you should not ever try to derive any positional information directly from such an image on land. 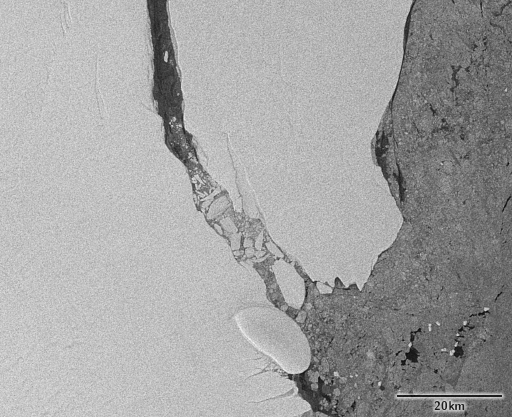 You can also see that noise levels in the radar data tend to be much higher than in optical imagery. After all we are talking here about a signal that is sent out across several hundred kilometers, is then reflected and a small faction of it travels back across several hundred kilometers again to be recorded and analyzed. Overall extracting quantitative information from radar data is usually much more difficult than from optical imagery. But the great advantage is of course it is not affected by clouds.

Since this might be confusing for readers also looking at images of this event elsewhere – images shown here are all in UTM projection and approximately north oriented.