I have written quite a bit both theoretically as well as practically about the use of pattern for area characterization in map rendering. Using either a pictorial or a structure pattern can help differentiating in the characterization of areas without the need to use an extensive and potentially confusing number of different colors and can be more intuitive than using colors alone as well.

Patterns that repeat the same symbol either in a random or a regular periodic arrangement are well suited for area shapes that vary a lot in size. The repetitive nature of the pattern makes sure that its characteristics can be identified even from just viewing a small part of a polygon. 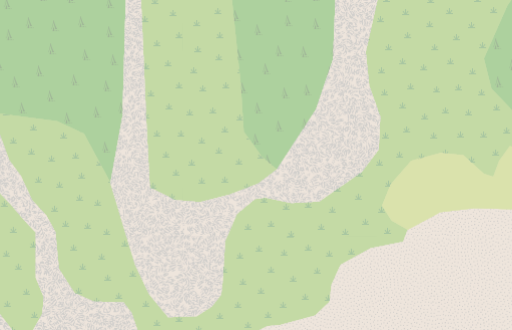 When visualizing polygon shapes of relatively small and uniform shape and size however this advantage is less useful and in case of pictorial symbols the repeating symbol is kind of redundant and adds unnecessary noise in many cases. Traditionally therefore small polygon shapes in interactive digital maps are often visualized with point symbols for detailed differentiation. This however has also a number of disadvantages, in particular point symbols blocking each other or interfering with labeling.

One idea for a possible alternative is what i would call a single symbol pattern. This means essentially rendering a single point symbol for the polygon but not rendering it as heavy symbol above all polygon shapes and linework and blocking each other and labels but like a pattern as an extension or variation of the polygon fill.

The use case where i now have tried this idea on is sport pitches. In OSM-Carto sport pitches are rendered with a fairly heavy green tone illustrating the fairly specific nature of these features. But they are rendered all identically – independent of the kind of sport that is being practiced on the pitch.

One solution to illustrating the type of sport on pitches used by maps has been drawing line markings. In the OpenStreetMap context this has been done both manually by mappers mapping sport field markings explicitly with barrier=line – a practice that is not seen farourably by many mappers – or automatically, an idea first featured by the French OSM style and later in a variation compatible to varying map scales at different latitudes in the German style. This technique however has the disadvantage of being (a) only suitable for sports with a distinct line markings (b) difficult to read intuitively because the line pattern is kind of a code for the sport only readble by someone familiar with it and (c) it has the potential to be confused with other types of line signature in the style. 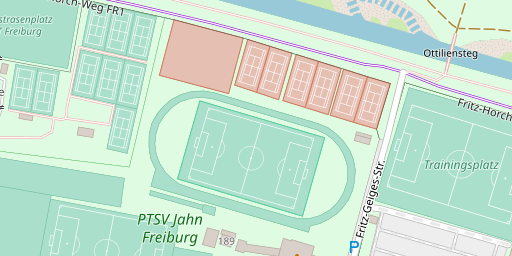 line drawings on the German style

Mapnik does not offer a technically simple and elegant way of rendering a single symbol pattern as a polygon fill. Obviously you can use a normal pattern that is very large with just one symbol in the middle and a lot of empty space around so it does not actually repeat in practical use. But this is neither elegant not does it offer a decent way of properly aligning the symbol. The technique i chose instead is using compositioning by first cutting out the pitch fill (using comp-op: dst-out) and then rendering just the pitches as a backdrop with the background fill and a point marker using comp-op: dst-over. 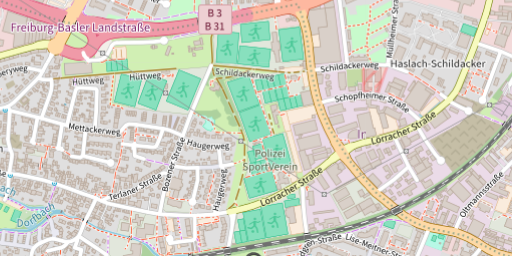 What i have also tried out with this change is enlarging the symbol to twice the size once the size of the pitch on the map allows this. This helps readability of the symbol especially in cases where there are labels overlapping the symbol (which as mentioned can happen since the symbol is non-blocking).

For the symbol design i chose the approach to visualize all sports uniformly with an illustration of a person performing the sport in question. This is a pretty widespread technique in sport symbology in general but in digital maps it is not that common so most of the symbols i had to develop from scratch. Having a uniform design concept avoids confusion and helps recognizing this group of symbols as a certain class within the map. 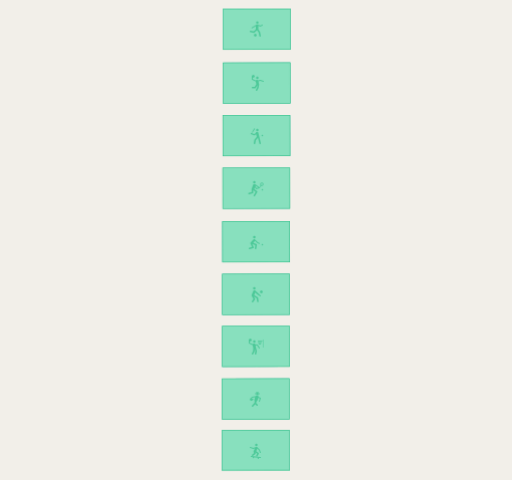 all the sports for which symbols have been added

As usual this change is available in the alternative colors style. More examples (all of which use ODbL OpenStreetMap data – like the other non-abstract examples above): 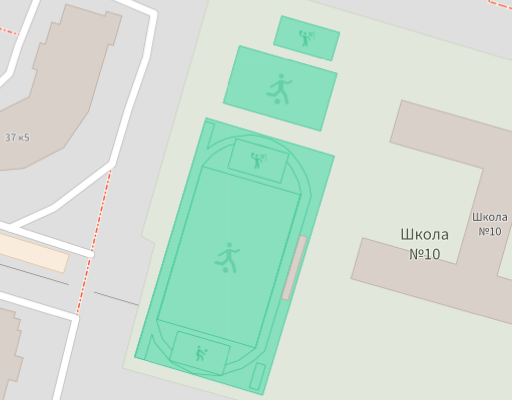