The new rendering of rock and scree on the standard OSM map style was introduced a month ago and and i here want to have a look at some numbers related to that now and share some thoughts based on those.

The numbers i want to look at are the daily change in the number of mapped objects in the database of the different types. I started at the beginning of the year so there are a number of days included before this change could have any effect on maping activities. For the three tags covered here, the tags newly rendered by this style change – natural=bare_rock, natural=scree and natural=shingle – there are no other events i know of that might have influenced mapping activity during that time in a significant way. None the less those three tags are very different in their current use:

Correspondingly there was hardly any change in the number of uses of natural=shingle until recently but this of course changed after it is now rendered: 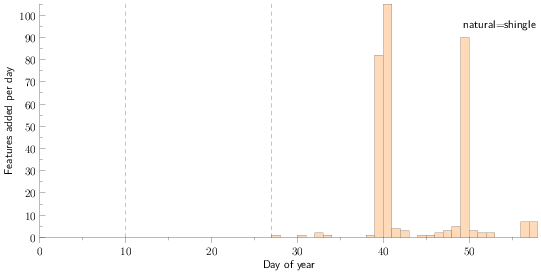 Regarding the timeline: The x-Axis here and in the following diagrams shows the day of the year with two dates marked: I made the original pull request with that change on January 10, it was accepted three days later with some changes and got rolled out in the map with version 2.27 of the style on January 27. Afterwards there has been quite broad coverage of this change on different channels like the Wochennotiz and weeklyosm which triggered further peaks in mapping activity. 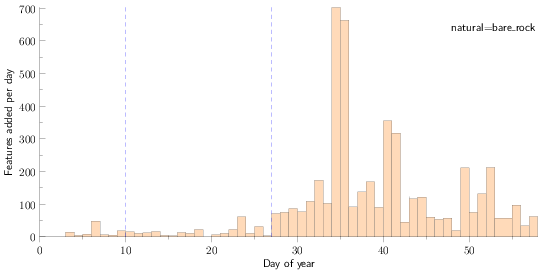 For natural=bare_rock there has already been quite a bit of manual mapping activity from day to day earlier and this increased markedly with this tag being rendered in the map. In general random variation of numbers from one day to the next are fairly high, people frequently map a lot one day and not at all the next. 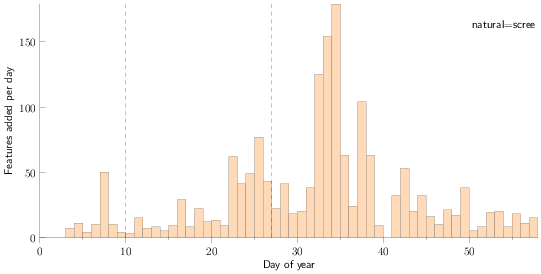 The effect is less visible in case of natural=scree – as said this is already being rendered in some other map styles. Here we also probably have quite a bit of influence of re-tagging activity, people re-tag previously mapped areas as natural=bare_rock and natural=shingle that were previously tagged natural=scree to make them show up in some map. 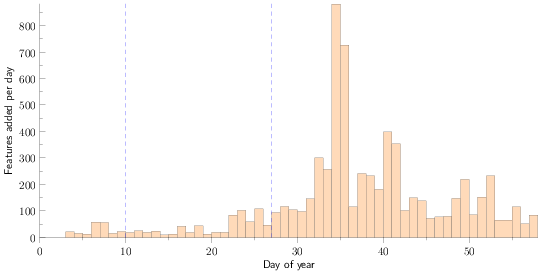 If we have a look at the numbers of all three tags together above we can still see a quite a strong increase in mapping activity, comparing the first ten days with the last ten days indicates it has more than tripled. Even if this is not fully sustained in the log run this is quite a remarkable effect of just a small change in the styling of just one map. We can also look at it in total numbers

This underlines the general impression that the standard map style has an enormeous influence on mapping priorities in OpenStreetMap. Tags that are not very widely used but have potentially widespread applications like those discussed here are obviously particularly strongly affected. Of course other OSM based maps play a role here too, i mentioned this in case of natural=scree but in general all the popular, widely used maps based on OSM data are quite conservative, show less than the standard map style.

In principle the importance of the standard map style on mapping priorities is quite well known although i have not seen much data on it before.