You can find two new cloud free satellite image mosaics on services.imagico.de now, both from areas on the southern hemisphere and largely based on data from the 2015/2016 summer season.

South Georgia is a subantarctic island in the south Atlantic Ocean north of the Antarctic peninsula. It has been mentioned in the media quite a lot recently due to the 100th anniversary of Ernest Shackleton’s Trans-Antarctic Expedition and the remarkable open boat journey from Elephant Island to South Georgia that happened exactly 100 years ago these days (from April 24 to May 10 1916). 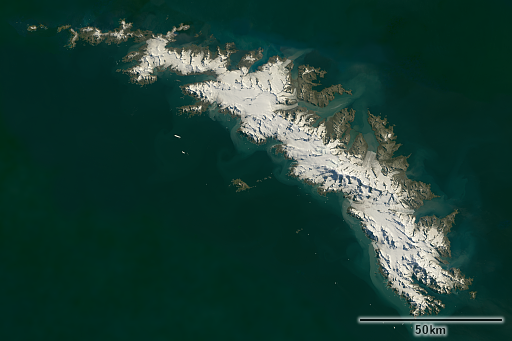 This image mosaic is mostly based on imagery from the last summer season but in parts also older images from previous years. There are several larger icebergs of Antarctic origin visible off the southern coast which is a quite typical appearance even during summer so i left them in the image. In 1916 Shackleton arrived at King Haakon Bay which is the large bay in the west on the southern coast (which was probably significantly smaller a hundred years ago due to the more extensive glaciers). Shackleton crossed the island’s interior to reach the whaling stations at Stromness Bay – an area which can be seen in the following crop: 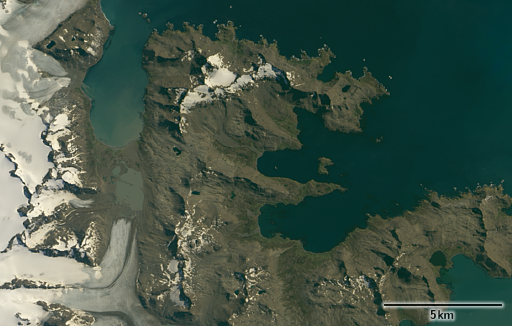 More information and samples can as usual be found on services.imagico.de.

With the Sentinel-2A satellite regularly delivering imagery for nearly half a year now i was looking for a suitable area to test my satellite image assembly techniques on Sentinel-2 data on a realistic scale. I chose the southern end of the African continent for this. This is a fairly obvious choice since the timespan where Sentinel-2 data is currently available for is the southern hemisphere summer, Africa is routinely covered in the Sentinel-2 acquisition plans and the cloud situation in the area in summer is sufficiently relaxed so a cloud free mosaic is almost possible based on just one season of data.

I wrote almost possible since there are a few smaller areas where i turned to Landsat imagery to fill some gaps – in particular in the northeast. This also gave me a good opportunity to evaluate how well combining Landsat 8 and Sentinel-2 data works. 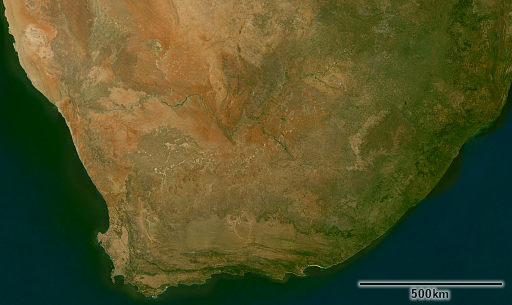 Since i did not try assembling a mosaic for the same area based on Landsat data alone – this would have been possible but there would have been relatively little practical gain of course – observations on the ease of using Sentinel-2 data are somewhat unreliable. The most interesting question is if the larger scene size has any principal advantages or disadvantages. Normally you’d assume with larger individual images you need a smaller total number of images (about 80 here) and therefore assembly is easier. But this is not really the case in a highly automated assembly system like i use. In fact with larger scenes you have more problems with cross scene inconsistencies (which are larger) and assembly is more wasteful. This from my perspective makes up for the other advantages of larger continuous images so overall assembly is not easier than with Landsat. In addition the tiled structure of Sentinel-2 data (see my report on this) of course means additional processing work and dealing with more redundant data for large size mosaic assemblies like here. 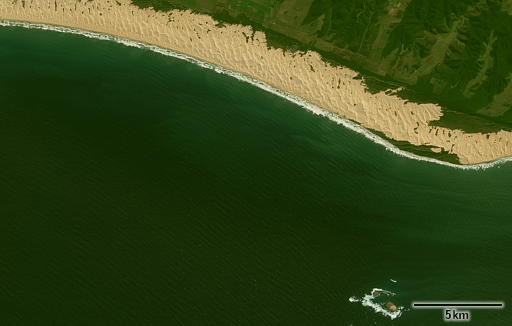 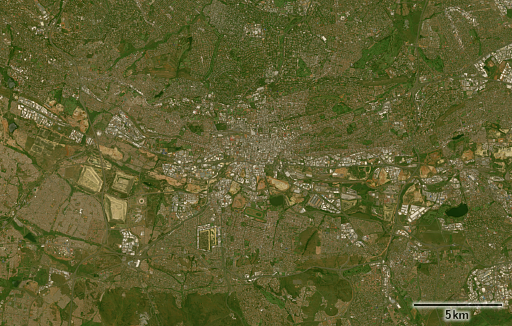 Since the available Sentinel-2 base data is currently very limited this mosaic – while being up to my usual standards in terms of cloud freeness – is not quite comparable to my Landsat mosaics in terms of representing vegetation maximum. Since the imagery used is summer data dedicated spring growth areas, in particular in the Western Cape region, appear much less green than in the Green Marble. 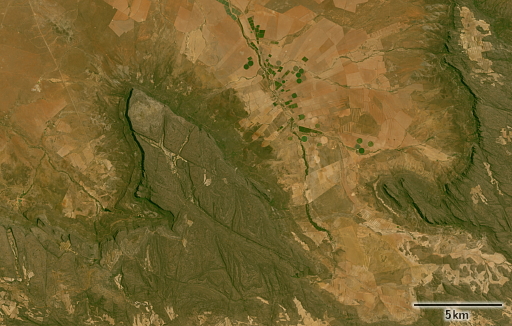 And because of the limited volume of data available there is also a somewhat above average heterogenity is appearance, visible primarily in form of some banding and step-like changes in coloring.

Visit this mosaic’s page on services.imagico.de for more information and samples.