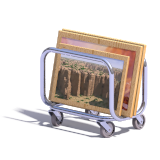 The picture uses a lot of the newer techniques available in

The following sequence of pictures shows the development of the scene, I no more remember everything changed from one version to the other so i will only mention the most important things.

Povray newsgroups. You can still have a look at these postings in the

Here are some code parts from the scene. You can use them for inspiration and to learn how to do certain things in Povray, but please don't just use them directly in your work without asking.