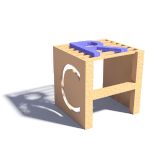 The main purpose of this tool is to post process

POV-Ray generated images, but it can be used for other image data like photographs, scans etc. too

This program is in beta stage which means that not everything is probably working as expected - this includes the documentation. Please report problems you find while using the program. I'm also open for suggestions for additional program functions.

HCR-Edit is a Windows application programmed in Delphi. The image files are displayed in the left part of the program window and the results of modifications can be seen immediately.

The image data is maintained as single precision floating point values. This means for grayscale images 32 bit of memory are required per pixel, Color images need three times as much.

Most of these functions can be accessed through the program main menu as well as the toolbar.

HCR-Edit can read and write a variety of different image file formats.

HCR-Edit can import and export image data via the Windows clipboard. This function is mainly intended for exchanging image data with other applications. Only 24 bit rgb and 8 bit grayscale data is supported.

This chapter describes the adjustments that can be applied to the image using the controls on the adjust panel.

These adjustments are always applied 'on the fly' which means they don't actually influence the image data in the system. Every time the display is updated of you save the data to a file they are applied. This means that the effect of modifications does not depend on the values here.

On top of the panel there is a checkbox named live update. Activating it leads to the display being continuously updated when values are changed. If this function is deactivated the image display can be updated using the Update button.

Currently the following adjustments are supported:

The complete formula for calculating the values is:

More sophisticated adjustments are handled in separate windows, they can be activated with a checkbox next to the button. This checkboxes should only be checked if you use the corresponding adjustment, otherwise the calculations will be unnecessarily slow.

In contrast to the adjustments modifications permanently influence the internal data representation. This means that modifying twice leads to a double application of the function.

The following modification function are available:

HCR-Edit allows detailed control over the the file format specifications when importing raw data. This way a large variety of file formats can be read. The adjustments are made in this dialog.

First the width and height of the image have to be specified (in pixel) the height can be concluded automatically from the file size if the 'auto' checkbox is activated.

Then the number of header bytes to be skipped can be specified.

Finally you have to adjust the format of the actual data in the file. There are 4 prepared settings for 8 and 16 bit single channel integer data as well as 3 channel data in order RGB. Furthermore 32 bit (single) and 64 bit (double) float data can be loaded as both single channel (grayscale) and rgb.

Other custom integer formats have to be defined using the custom settings.

These settings consist of the number of bytes per pixel and per data value and the starting byte for each value. This way you can also extract three color channels from file formats containing more than three data channels.

The color curves are transmission curves for the color values of the image. a color value x is translated into a value y according to a spline function.

If same for all channels is checked there is only one curve for all color channels no matter if the image is grayscale or rgb.

is pressed there is a new knot added to the active spline or the active knot is deleted when the right mouse button is pressed.

The remaining buttons can be used for activating the different channels and editing the curves individually.

The exposure settings are applying a exponential film exposure simulation to the image. The color values are trated with the formula:

The values for Gain and Exposure can be adjusted in the window.

This function is intended for applying focal blur to an image. For this purpose it uses depth data in form of a second grayscale image that has to fit to the image the function is applied to.

A lot of 3D programs have functions to generate a depth image from a scene (also known as z-buffer). With POV-Ray you can texture the whole scene in ambient white and add an ambient black fog or apply a spherical pattern texture ranging from black to white to get the depth output. Don't forget to add hf_gray_16 on to global_settings to get 16 bit accuracy output.

In addition to the data file there are 3 values to control the blur:

Finally you can control which distances to blur and which to maintain untouched with a transmission curve for the depth data. The curve editor works like in the color curve window.

This window allows to merge the content of a second image file (or parts of it) into the currently loaded image. This function is mainly intended for merging partial renders into one image. Right now you can only specify the vertical position, therefore the function is only suited for merging horizontal stripes, for example renderd with POV-Ray using the +sr / +er options. HCR-Edit is also capable to read PNG files from interrupted POV-Ray renders.

The image file to be merge is opened using the Add button at the upper right of the window. Only PNG files are possible here right now.

The vertival starting position for the merged stripe is either given in the Position box or interactively using the mouse in the preview window. You can either merge the whole image or only a specified number of lines. For precise positioning of the image you can magnify the preview window with the Zoom function.

Pressing the Merge button finally merges the image into the into the main image data.

The levels tool adjusts color range and balance of the loaded image. The image histogram is displayed for helping to find the correct values.

The Input levels specify what cange of color values from the unmodified data is supposed to be used for the resulting image. Values above or below this range are clipped. For the transit between those values you can choose a gamma exponent. This transformation applied to a black-white gradient is displayed below the histogram.

The Output levels specify what range of the possible output values is supposed to be used in the resulting image.

When editing color images each of these adjustments is available for each color channel separately and for all channels combined. For editing the different channels use the button set on the upper left.

There is an additional automatic selection of values available through the Auto button. This function is based on an analysis of the histogram.

The small button next to the channels selector expands controls for specifying the histogram resolution and a parameter for the auto adjustment.

This is a list of changes and new features added in the recent versions.

This program is free for private use. Distribution via public servers on the internet or on discs/CD-ROMs etc. for selling is not allowed without permission.

No warranty of any kind is made for this program.