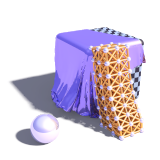 This part of the Sim-POV documentation gives a short practical introduction into using Sim-POV and describes some simple simulations step by step.

The simplest thing that can be simulated in Sim-POV is the movement of individual point masses. Their movement under the influence of gravity and environment objects is handled in this part.

We start with a simple scene setup:

To simulate the movement of a single mass we add the following to the global_settings{}:

The purpose of the individual lines of this block is the following:

What follows is an #if conditional. It switches between two different blocks of code depending on whether the scene is rendered as an animation or not. This is useful for initializing the simulation.

The first part contains statements for the animation render:

Finding the right step size is probably something most difficult for the beginner. A smaller step size generally leads to more accurate results. Usually the step size has to be below a certain value depending on the other simulation settings to get usable results, but it is not always obvious if some strange result is due to large time steps. High stiffness values in environments, collision and connections usually require smaller time steps. If you experience unexpected results it is often worth trying to decrease the step size and see if problems vanish.

The topology{} block contains just load_file and save_file statements referring to the same file. This makes Sim-POV load the old simulation data at the beginning, calculate the steps for the current frame and save to the same file afterwards.

The second part contains statements for the still render

step_count is set to zero here so no simulation steps are calculated.

The load_file statement finally saves this mass to a file.

To show the mass in the scene we can use a macro from the 'mechsim.inc' include file:

The meaning of the parameters of this macro is described in the 'mechsim.inc' include file documentation.

Now all we need to do is render the scene once as a still to generate the initial data file and afterwards render it as an animation:

In the first part of the tutorial we have handled masses and their movement under the influence of gravity and the constraints of the environment. If several masses exist in the simulation collisions between them have to be taken into account.

For turning collision calculation on the following block is added to the mechsim{} section:

The first two numbers tell Sim-POV which collision to calculate. For details see the reference section. The numbers used here turn calculation on for all mass-mass collisions.

Another change made in this tutorial step is changing the environment to function based calculations. This usually leads to more accurate environment collisions, especially with more complex geometries but also tends to be slower and requires smaller integration steps.

Defining the environment as a function is fairy easy with the Iso_CSG library. The definition in this case looks like:

Note that the stiffness, damping and friction parameters in the environment now have the same meaning as in the collision settings because it uses calculation method 1 (force based environment collisions).

This scene also adds new masses during the animation. This is achieved by adding the following code to the topology{} section:

It means that in every sixth frame a new mass is added at the starting position with the same starting velocity as the first mass.

Apart from masses there is another element that can be added to the topology{} section: connections. Connections can be seen as springs. They connect two point masses and exert a force on them depending on the current distance of the masses compared to the relaxed length of the connection. In addition there is a damping property generating dissipative forces.

A connection{} block is added to the topology{} section like a mass:

if no length is given the current distance of the masses is used.

The mass indices are counted in order of creation starting at zero. The three connected masses from the following scene are created with:

The fixed on in the first mass definition fixes the position of this mass.

With plenty of such connections we can form more complex shapes. The 'mechsim.inc' include file contains several macros forming grids of masses and connections.

Placing the following in the topology{} section generates a box-like grid of connected masses:

The meaning of the different parameters is described in the 'mechsim.inc' documentation. Trans1 is a transform moving the whole grid from its predefined position. It has to be declared before:

The resulting animation shows a moving and deforming box geometry.

The MechSim_Generate_Grid_Std() macro also generates faces for the outside surface of the box. Faces are triangles each connecting three masses. They can be used for collision calculations and for displaying the geometry as a mesh. The latter can be done easily by changing the parameters of the MechSim_Show_All_Objects() macro:

Apart from 3D grids we of course can also create 2D rectangular patches. Such objects behave like cloth or foil and offer a very interesting field of simulation.

Like 3D grids rectangular patches can be created with macros from the 'mechsim.inc' include file:

This creates a 50x50 masses patch, again movable with a transform. Description of the parameters can be found in the include file documentation.

The following sample scene also uses a different simulation method than the previous scenes. It is called gradient descent method. It does not integrate the equations of movement like the other methods but moves the masses directly according to the forces influencing them. Inertia does not have effect with these method, therefore oscillations can't occur. Still the step size has to be chosen small enough for accurate results. The movement won't look very realistic in an animation but the final result can be used for a still render. Another disadvantage is the lack of friction, therefore the patch slides off the sphere in the end.

There is also a specialized macro for generating a mesh from a patch topology including normal vectors and uv coordinates. Rendering the previous topology with this macro results in the following picture:

There are a lot more aspects of the Sim-POV patch that are not handled in this tutorial yet. Reading the reference and 'mechsim.inc' include file documentation should help learning about those things. The sample scenes show several examples what Sim-POV can be used for but there are a lot more possibilities.