I made some more high impact color changes to the alternative-colors style i want to quickly discuss here.

First i changed the farmland color. Farmland was is OSM-Carto rendered for a long time with a fairly dark brown tone. This looked odd in particular in contrast to the brighter urban landcovers. Since farmland covers pretty large areas in regions with intensive agricultural use a brighter color makes more sense. The color was therefore changed into something significantly brighter several years ago.

This was a big improvement but maintained the oddity of using a brown color for something vegetation related.

The problem is that in the bright color domain you have relatively little room for multiple distinct colors. Therefore the color had to be pretty strong to be discernible from the other bright colors which was something many people also disliked.

The solution i implemented now is essentially a color swap (plus some tuning) of the farmland color and the education/hospital (societal_amenities) color. This makes quite a lot of sense because of the similarity rule (that features similar in meaning and purpose should use similar colors and those different in meaning and purpose different colors). This is a bit of a disentanglement of area color use in the style. 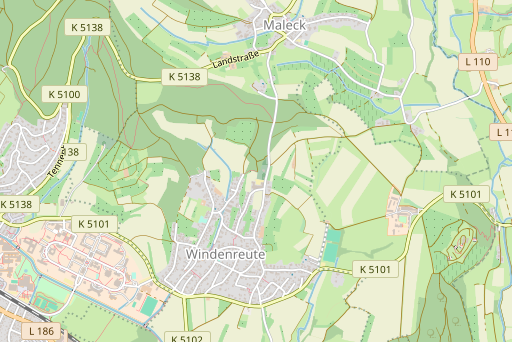 the new farmland color – click to see on larger area

I had contemplated this change for quite a while already but originally was not so satisfied with the result. With some tuning and some time for getting used to it i now however think this works quite well.

With the road colors i implemented what is essentially a shift of the road classes by one downwards and extrapolation of a new color for motorways at the top extending the existing scheme.

A bit of background for that as well: Back when the current road color scheme in OSM-Carto was developed there were essentially two major constraints:

These constraints meant the number of distinct colors had to be reduced to five (red, dark orange, bright orange, yellow, white) and tertiary roads lost their distinct color.

With purple not being used for boundaries any more in the alternative-colors style i can lift the first constraint and extend the color palette to purple and move back to six road colors. 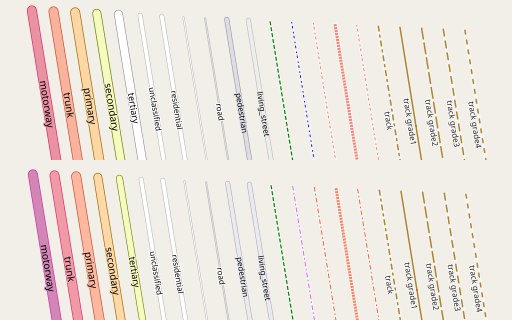 the road color scheme in OSM-Carto (top) and here (bottom)

Here is how this looks like practically at various zoom levels. 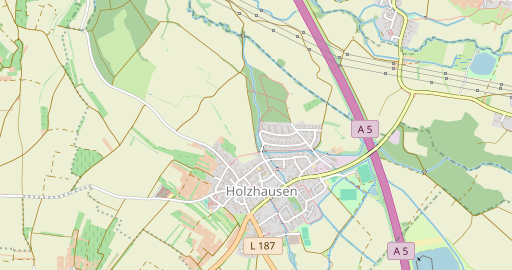 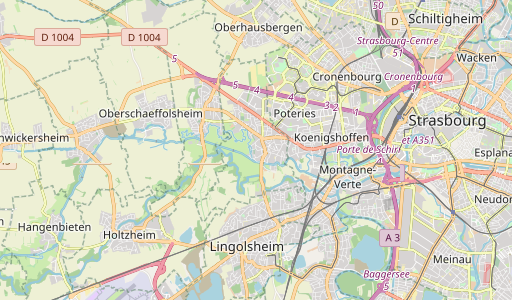 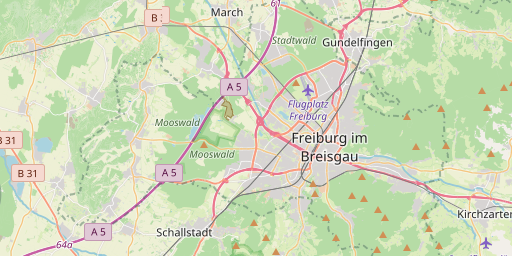 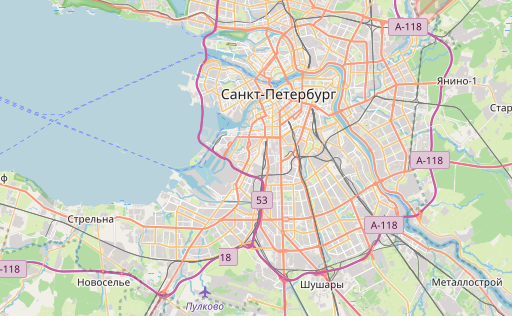 Update: Based on the remark by Ilya in the comments below i adjusted the color calculation script to limit the darkening of the motorway color. This makes motorways somewhat brighter than in the samples above, in particular at the lower zoom levels. You can see this in the samples in the readme and in the low zoom demo.