When writing about satellite images here i concentrate on open data imagery but i take the launch of a new commercial earth observation satellite by DigitalGlobe earlier today as opportunity to update my previously shown satellite comparison chart. 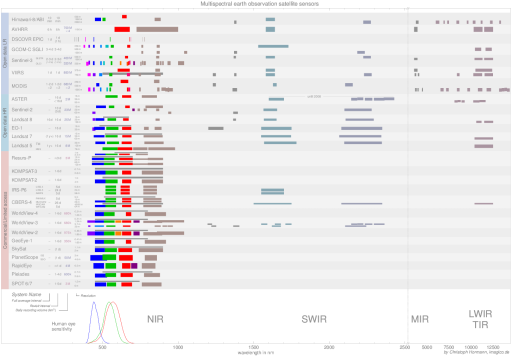 In addition to WorldView-4 i added the Terra Bella SkySat constellation. These satellites feature an interesting sensor concept and are meant to offer the currently unique ability to record video. There is however very little publicly known on operational plans for this system.

Also added is a column with the daily recording volume in square kilometers for the different systems. The most frequently advertised capability of satellites in addition to the spatial resolution is the revisit frequency which indicates how often a satellite can record images for any single point on the earth surface. A revisit interval of one day however does not mean the satellite system can record daily coverage of the whole earth surface. The recording volume describes what area can actually be covered on a daily basis. There are two variants: the potential recording volume (indicated in red) which is often a more or less theoretical value and the practical recording volume that is recorded in actual operations (in blue). In case of the commercial satellites both is based on claims by the operators obviously.

For the high resolution Open Data systems the numbers are determined based on average actual recordings. For Sentinel-2 this is a bit difficult so i based it on the specification of an average 14 minutes recording per orbit as specified in recent mission status reports. For the low resolution continuously recording systems numbers are – for compatibility – based on half orbit recordings although the longwave bands are of course recorded on the night side as well.