I have discussed depiction of forests and woods in maps on this blog in the past. Here i want to cover a related topic: The depiction of individual trees in maps – as well as bushes/shrubs, tree rows and hedges. I will do so in four parts – with this first part having a look at the depiction of these in traditional maps and plans.

Individual trees are much less commonly shown in maps than forests and woods. Most maps which show individual trees do so only for trees of some kind of significance as a landmark or otherwise, or for isolated trees in an otherwise treeless environment. The dominant depiction of trees of some significance is with a profile view symbol. Here there are a few examples of such designs from maps in the scale range of 1:5k to 1:50k. 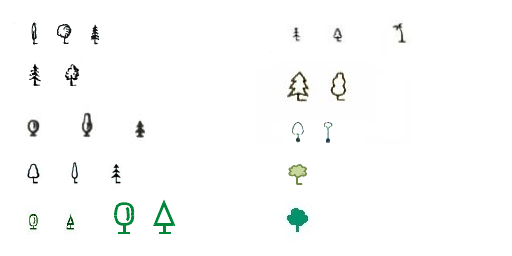 The profile depiction has the huge advantage that it easily allows to transport additional information on the type of tree in a fairly intuitive fashion – which in the above examples is done in some cases, primarily for the distinction between broad-leaved and needle-leaved trees. A much more detailed differentiation can be found in Soviet large scale (1:1000/1:500) mapping, as illustrated below.

In maps of scales between 1:5k to 1:50k the depiction of individual trees or bushes of no particular significance is more rare and, if it is done, that happens usually in the form of a simple dot or circle. Rendering of individual bushes and shrubs is even less common – but there is a specific design of depiction that has been coined in Soviet topographic mapping and is used there both as a point symbol and as an area pattern symbol, and that continues to be used in eastern European mapping traditions. Otherwise, bushes are typically rendered either similar to trees – with simple dots/circles – or with a smaller and simplified version of abstract tree symbols showing a profile depiction.

More common than depiction of individual trees is the aggregate rendering of rows of trees and hedges – either in isolation or at the side of a road. In the German topographic mapping tradition hedges play a strong role and are typically differentiated into normal hedges and elevated hedges on earth dams called ‘Knick’ – which are a common landscape feature in northern Germany. Different versions of depicting those in German topographic maps are shown here. Note in particular the hedge depiction from the traditional DGK5, where circle symbols are combined with abstract profile tree symbols allowing to illustrate the tree type. 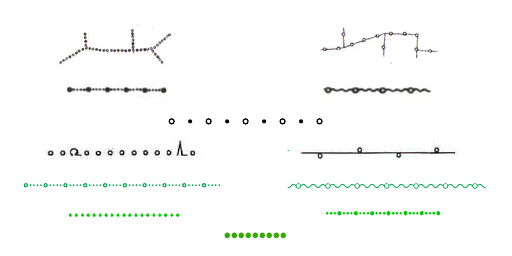 Hedge (left) and elevated hedge (Knick, right) depiction in German topographic maps of various ages and scales. Symbols shown in the middle are used for both.

Examples for signatures of hedges and tree rows in maps from other countries can be found in the following. Note the Slovakian design, featuring a tree type differentiated from-the-top view rendering with alternating symbols for mixed tree type rows. 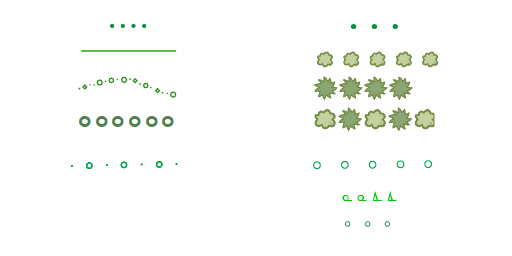 Use of symbols resembling a view of a tree from the top is much more widespread as a means to display individual trees in larger scale architectural drawings and site plans. In contrast to maps, systematic publication of such plans is quite rare world wide. The most extensive collection in that direction i could find was in the US Library of Congress as part of the HABS/HAER/HALS. These are plans largely drawn for documenting the state of these sites rather than plans drawn by architects according to what is planned to be built (which is a purpose very different from that of maps, obviously). Here are a few examples from those: 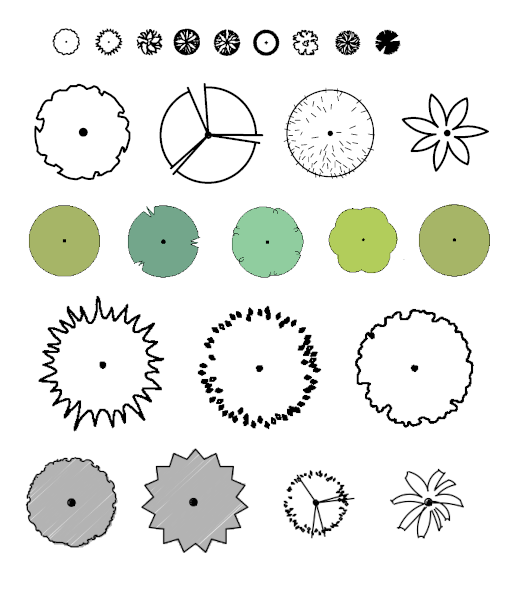 Most of these symbols (except for the first row) are not rendered at a constant symbol size but to scale – with the size of the symbol representing the crown diameter of the tree. Generally speaking, the design of such plans follows conventions very different from those in cartography. I won’t go into further detail on that here – that would be a subject for a separate blog post. Below you can see just a few practical examples of tree depiction in plans at different scales and from different times. 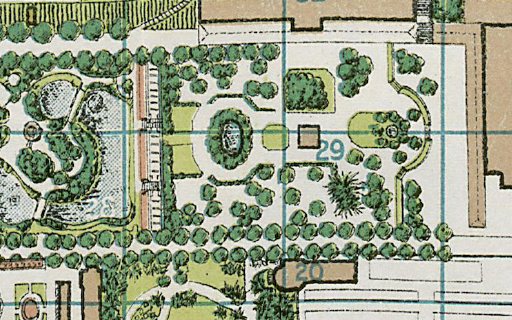 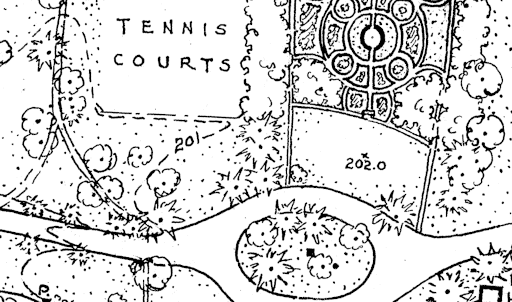 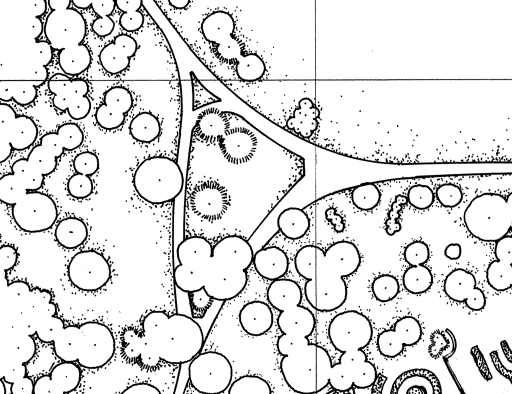 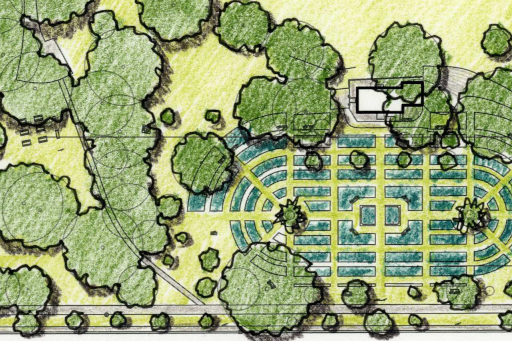 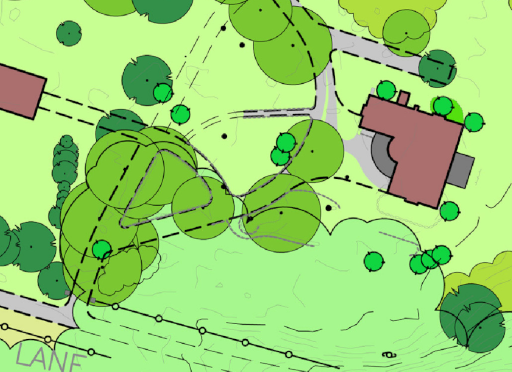 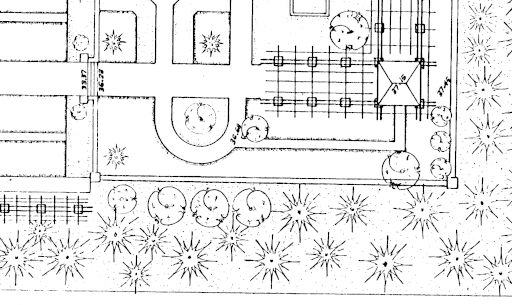 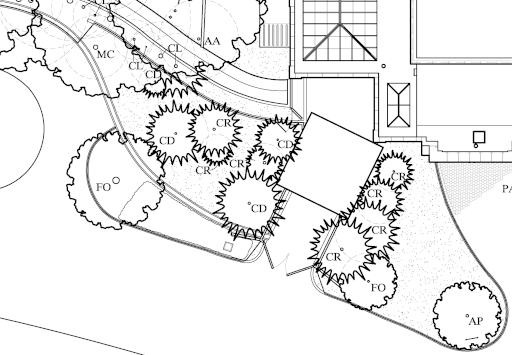 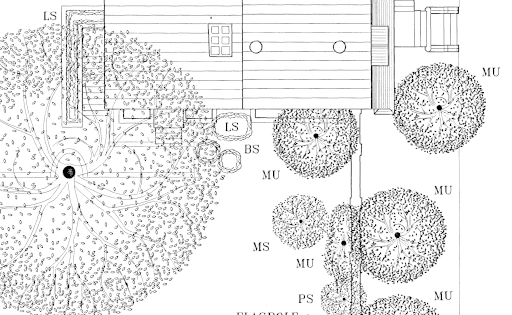 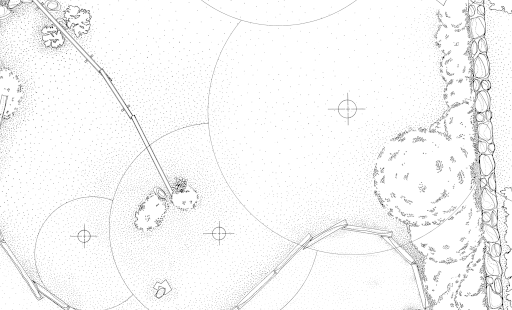 The second part of this series of blog posts will deal with how trees are mapped in OpenStreetMap and how these are shown in OSM based maps.