I am pleased to announce a major update to my global satellite image product Green Marble.

The Green Marble is a medium resolution whole earth image, offering an unsurpassed uniformity in quality across the whole planet surface on both water and land coloring, based on recent data, and a hundred percent cloud free. 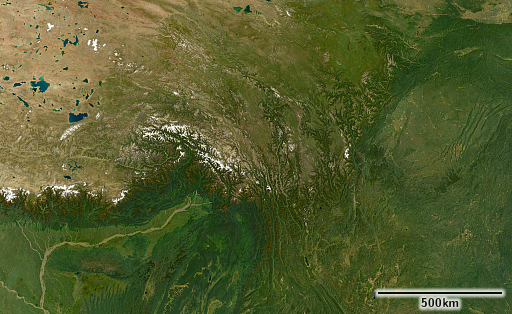 The newly produced version 3 provides a complete update to the land surface depiction – based now primarily on Sentinel-3 data (like the water rendering as it was already in version 2.1) – and using a completely new aggregation methodology, based on experiences derived from earlier versions of the Green Marble, as well as techniques developed for regional mosaics.

From the user perspective, version 3 is also a huge improvement in quality and i will provide some examples for that in the following.

The first version of the Green Marble was produced exclusively from MODIS data. With both satellites carrying MODIS instruments reaching the end of their life it has however become important for a future proof update path to move to other image sources. For water surfaces i had already moved to use of Sentinel-3 data in version 2 of the image. Apart from the foreseeable end of the supply of new MODIS observations, MODIS data also comes with various issues. In addition to the various problems stemming from the age of the instrument and the fact that only one visible light spectral band (red) is available in high spatial resolution, the more recent versions of the MODIS surface reflectance data available are subject to some pretty severe systematic errors. These essentially make the data unusable for visualization applications without investing significant effort into mitigating them. This has already made production of the Green Marble from MODIS data quite difficult in version 2 and is also likely one major reason why you hardly see any newer larger area visual color mosaics made from MODIS data any more. 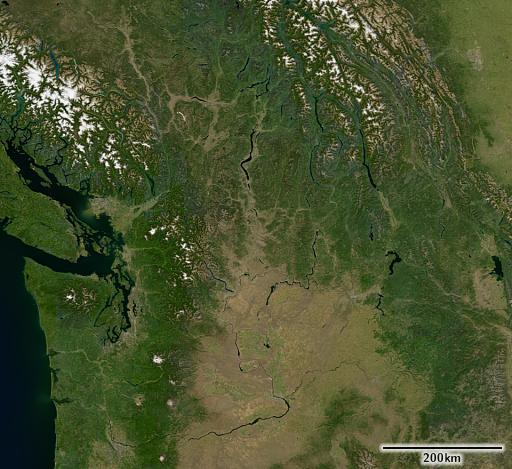 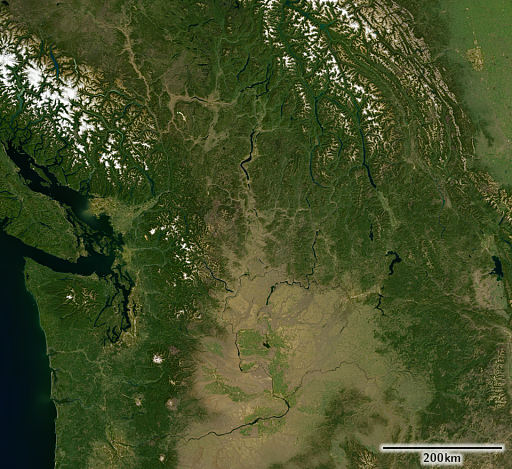 Sentinel-3 land surface reflectance data has its own issues (as i discussed) but most of the inaccuracies are random in nature and therefore not too troublesome when you do pixel statistics. The real problem is that Sentinel-3 Synergy data is incomplete due to the fairly silly masking of water areas. Because of that, i moved to processing Sentinel-3 images from the Level-1 data using Synergy Level-2 data for calibration of the atmosphere compensation. This requires processing a much higher volume of data of course. Overall, about 750 TB of data were downloaded and processed for the production of the Green Marble version 3 – including 120 TB of MODIS data, 320 TB of Sentinel-3 OLCI Level-1 data, 170 TB of Sentinel-3 Synergy Level-2 data and 140 TB of Sentinel-3 OLCI Level-2 water reflectance data.

MODIS data is still used primarily for the following purposes: 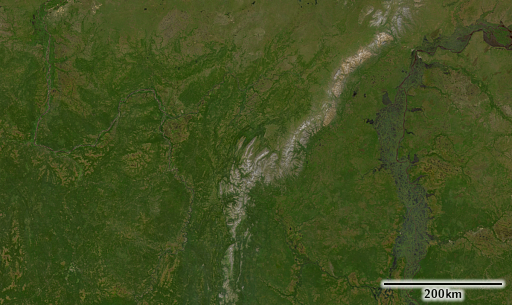 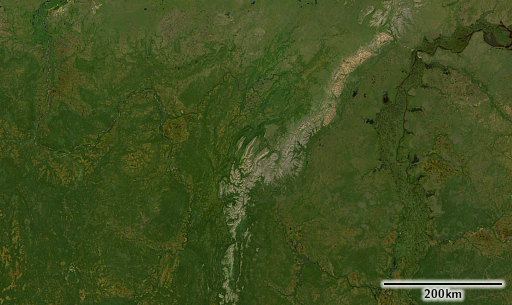 As you can see in the samples, despite the switch of the primary data source, not that much has changed about the overall appearance of the image in terms of colors at small scale compared to the previous version – which is testimony to the highly consistent and accurate color depiction. Both the differences in atmosphere compensation and the remaining systematic errors in that and the different spectral characteristics of the two sensors lead to some color shifts in the results. Ultimately, neither the MODIS nor the OLCI instruments are ideal for accurate visual color representation. 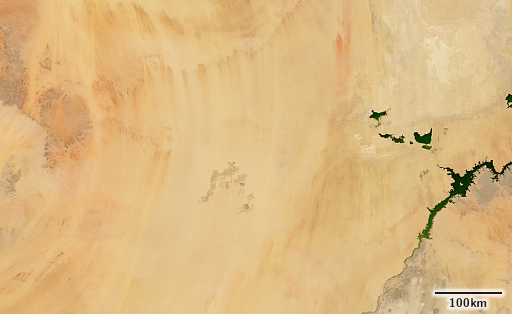 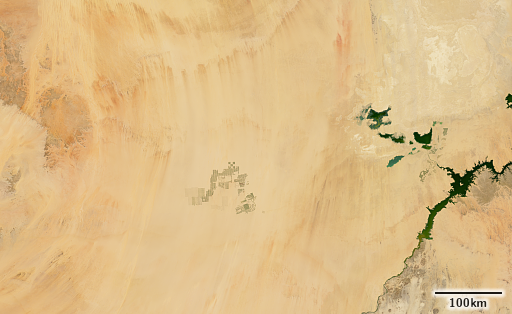 In addition to the switch in the primary data source, the land data processing methodology was completely redesigned for the version 3 mosaic. This has lead to quite significant improvements in the results, despite using a more narrow data basis in terms of number of years covered.

Apart from the improvements in quality that i will show examples of in the following, i first want to mention that the whole processing – and as a result the final product – are now available with both the illumination and shading as recorded and in a shading compensated version representing the illumination independent color of the earth surface. 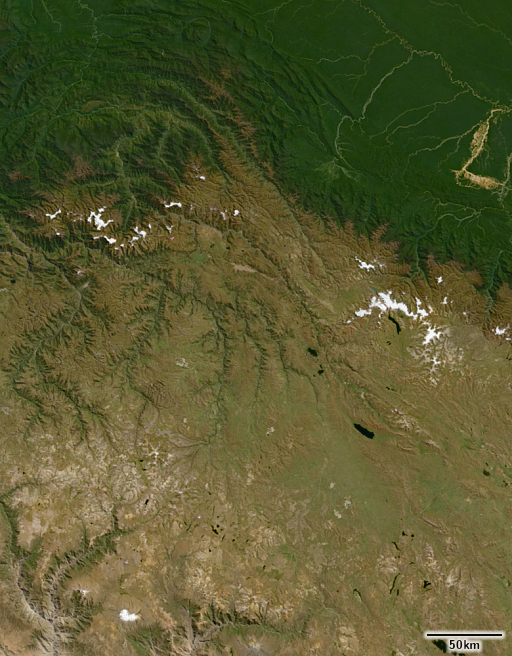 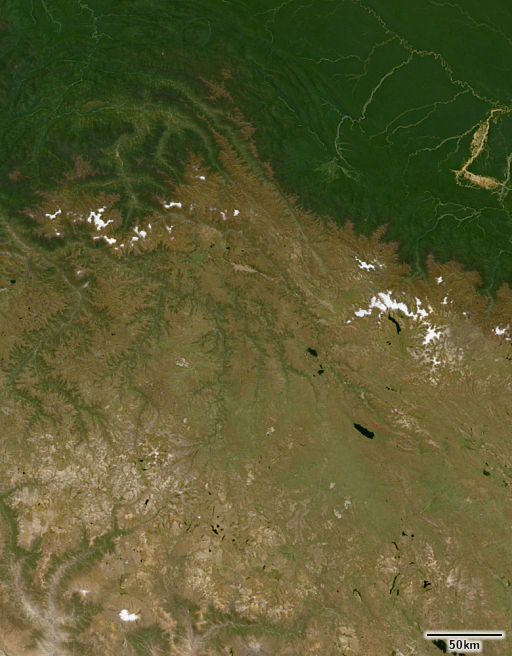 In the previous versions of the Green Marble i had not produced these different variants, except for the polar regions in version 2, because by combining data with a morning and afternoon observation time frame (from the Terra and Aqua satellites) most shading effects in the image data were already eliminated. With the move to using predominantly Sentinel-3 data with a constant earlier morning recording time this changed. 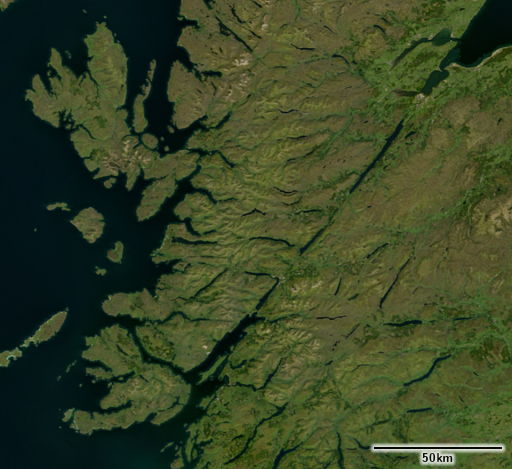 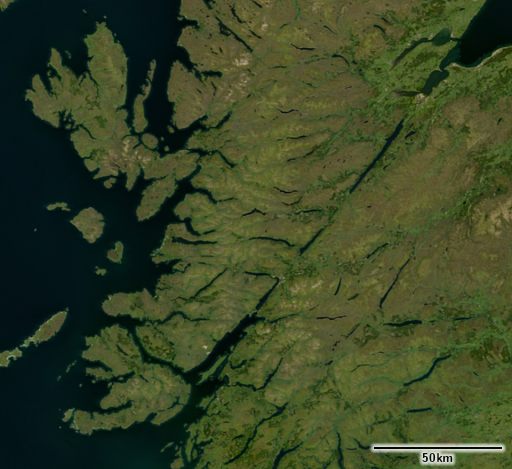 Based on the shading compensated image variant, renderings with customized shading can be now produced in much better quality. 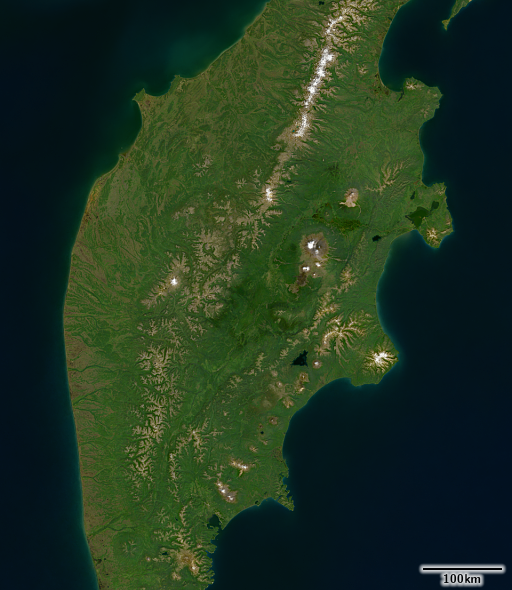 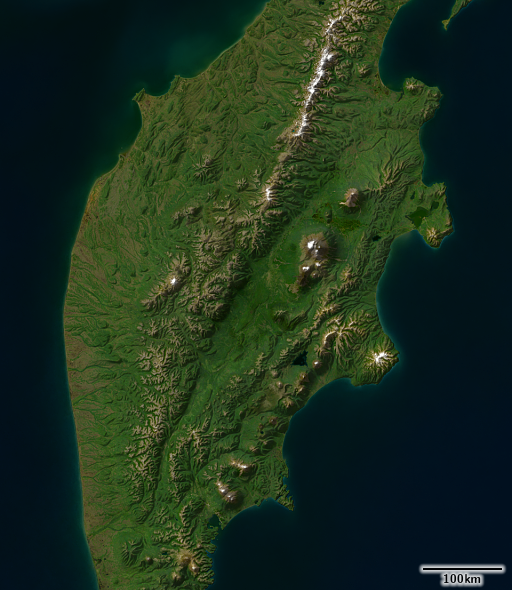 Substantial quality improvements are in particular visible at higher resolution because the noise levels have been substantially reduced almost everywhere. 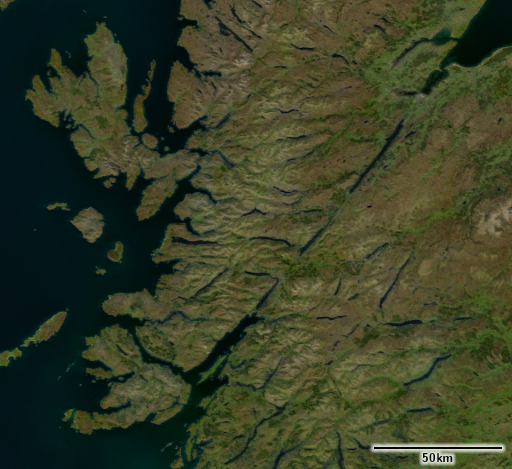 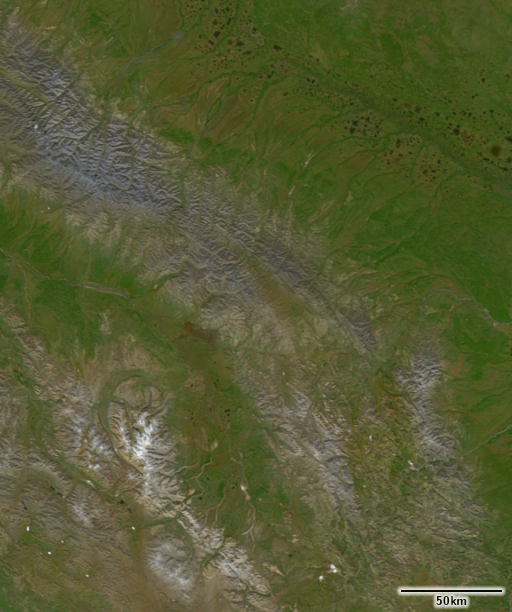 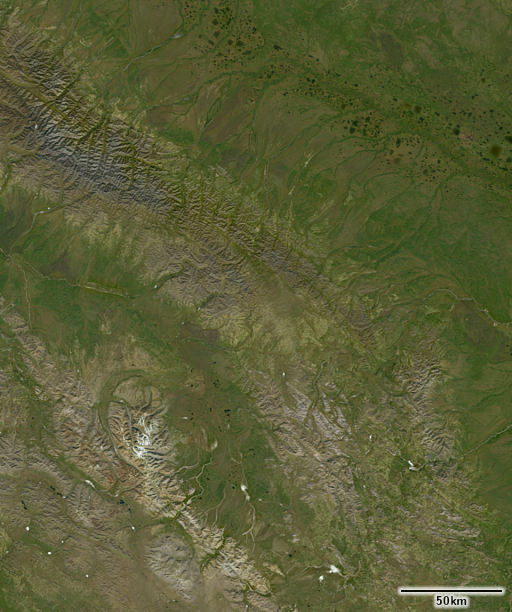 This is the case even in desert regions where it is often not that readily visible in the standard tone mapping, but where you can see a significant difference in contrast enhanced rendering. 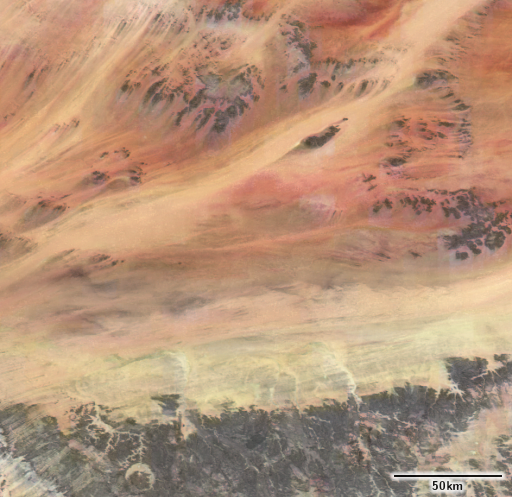 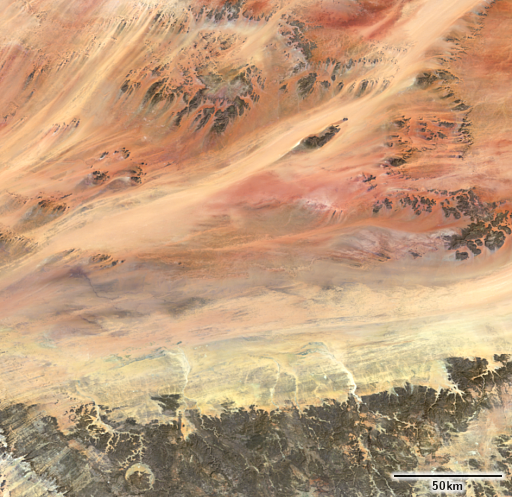 To wrap up this announcement, i want to provide some historic and market context for the Green Marble as a product.

It has now been more than eight years since i announced the first version of the Green Marble in 2014. During these years, and over the different updates and improvements i provided to the image, it has stayed unique in its market segment. Essentially all market competitors concentrate on higher spatial resolution products but with lower quality in just about every other aspect (like lack of visible clouds, color quality and consistency, completeness in coverage, noise levels). That puts me in many ways in a comfortable position but it also means that i have rather limited information about the market needs and where users and potential users of the Green Marble see deficits and room for improvements.

The improvements i developed in version 3 and before were designed based on user feedback and my own assessment of where there are deficits and where things should be improved. But i regard this to be a rather limited perspective on the product and its value for the user. So i would be highly interested in feedback of potential users of the Green Marble – either in the comments below or via mail. If the principal idea behind the Green Marble as a global satellite image mosaic is appealing to you and for your use case, especially that it does not focus on high spatial resolution but puts other aspects of quality in the foreground, what dimensions of quality are the most important for you? This would be very interesting to know, in particular if it includes aspects that i have so far not put focus on. 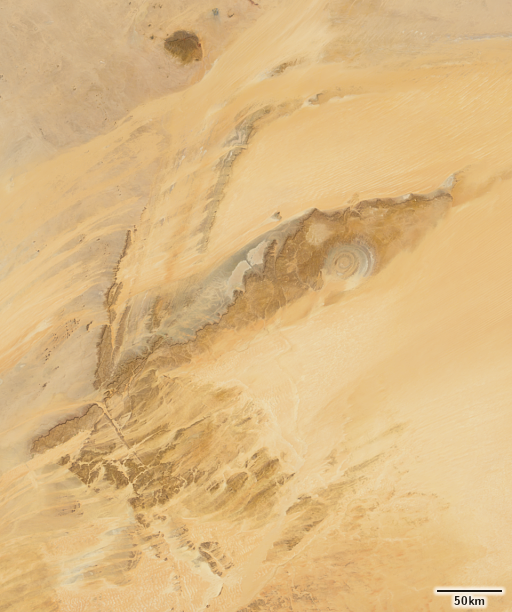 As usual you can find the updated specifications page for the Green Marble mosaic on services.imagico.de. Existing customers with a Green Marble license are eligible for a reduced price update to the new version. If you are interested in using the Green Marble in your application contact me through the form there or via email. An interactive map in Mercator-Projektion for further browsing can be found also on maps.imagico.de.